This year’s primary election is Thursday, September 10th. Most of the fighting is on the local level. Here are some updates: 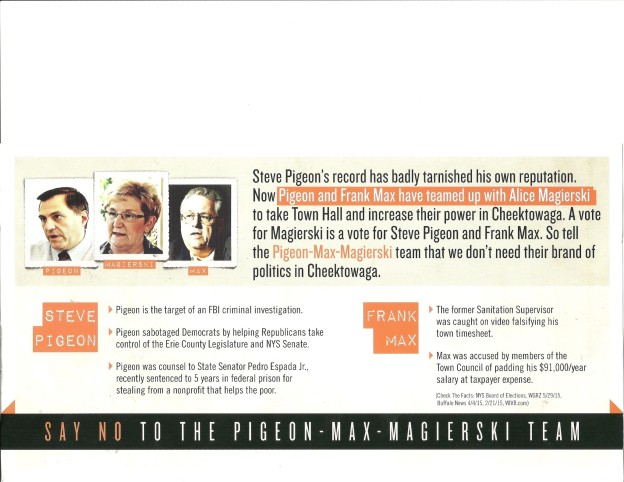 Moving into the final days of the primary campaign, the three major candidates for the open Family Court seat are in high gear.  Given the size of their treasuries and TV buys thus far reported, all three are competitive.  The real challenge for all of them, however, is their organizational strength to get out the vote in what is likely to be a very small countywide turnout.  Only in pockets of the county where there are serious primaries going on will there be much activity for Family Court.  Brinkworth has most of the Democratic organization behind her.  Freedman has the Republican establishment with her.  Brown has whatever Joe Makowski and Maurice Garner are piecing together for her.  Look for a Brinkworth-Freedman rematch in November.

Here is a summary of what the 11-day pre-primary and the 24-hour notice financial reports show:

Is Maziarz coming back?

In the “what we’ve heard” department, there are stories circulating that former Niagara County State Senator George Maziarz may be appointed as a high-level executive with the Western Regional Off-Track-Betting Corporation. He would reportedly replace a six-figured executive who is retiring but who would stay on for a time to help Maziarz learn the job. And you thought that only went on at the Erie County Water Authority!

If this turns out to be true, it would place Maziarz in a position of influence in the distribution of patronage throughout the WROTB.

If this turns out to be true, it might be inferred that Maziarz’s problems with the Moreland Commission and/or Manhattan U.S. Attorney investigation are drawing to a close without any prosecution of Maziarz.  Note the previously reported facts about his use of $120,699 of campaign funds for legal services.

And finally, if this is true, what will the former senator do with the nearly $1 million that is still sitting in the Committee to Elect Maziarz State Senate account?  Who remained his friends during the investigation and who did not?

Former Erie County Sheriff Mike Amico passed away Saturday night at the age of 95.  His reputation as the tough head of the Buffalo PD narcotics squad in the 1960’s propelled him into two terms as Sheriff, serving from 1970 through 1976.  I first knew him from my days as a member of the staff of the County Legislature.

I got to know him much better, however, as my over-the-back-fence neighbor for more than twenty years.  He was always friendly and interested in talking about politics.  I last saw him at our voting location last September, still up-to-date on what was going on.  Rest in peace Mike.

I began Politics and Other Stuff at the end of March 2015 to offer a blog with some information for readers, some things to think about, and to have some fun doing that. I am happy to say that things are working out pretty well so far.

Starting a blog from scratch has some challenges, both in technical issues (like how do I get this thing published and distributed) and content matters (what is the next blog going to be about). I’m still learning, and I want to thank my family for making what have turned out to be very usable suggestions about developing the site.

The post that is sent out today is the 42nd that I’ve done in 24 weeks. What is really encouraging is the readership. WordPress, the organization I use for my domain name and server, cannot tell me who is viewing the site, but they do report how many views have occurred. As of September 7th  Politics and Other Stuff has had more than 10,300 views!  So I would like to say “thank you,” and please keep reading.

I have a growing email distribution list, but I also know by looking at the number of views that each post receives that people who are not on the email list have been reading the blog too. If you are not already receiving emails from me when new posts are available, just send an email (politicsandstuff15@gmail.com) and I’ll add you to the distribution list.

One thought on “Pigeon issue in Cheektowaga; primary fight in Hamburg; Family Court candidates raising and spending; is Maziarz coming back? Mike Amico. And a thank you”