With all the discussion of who won or who lost this week’s Republican presidential debate, the talking heads who populate the all-news stations, radio talk shows and newspaper columnists, main stream media and far-right media alike, are trying to keep alive something they should really let go of. The contest is narrowing a lot quicker than they would have you believe. Here is a short read on where the contest shapes up:

And then there is:

I have been pointing out the polling results over the past several months. The outsider/far-right candidates have consistently as a group garnered 60-65 percent of party support, and the numbers are rising a bit. The establishment candidates, as a group, hover in the 20-25 percent range. Less than 10 percent of the Republican respondents to the polls indicate that they are undecided, but that will probably go up somewhat as the lesser candidates give up.

The nominee who will be chosen through the primary and caucus process will need to run the gauntlet of very, very conservative voters. These are voters who are conservative about fiscal policy, foreign policy, social issues. In that regard, Rubio has some explaining to do.

Cruz is a crafty politician who is apparently building a good campaign structure and he is also a good speaker, albeit with limited math skills. How come when Texas Governor Rick Perry couldn’t count to three his campaign ended, but when Texas Senator Ted Cruz couldn’t count to five, he gets a pass?

It stretches credibility to think that the outsider/far-right 60-70 percent of the Republican electorate who will choose the party’s presidential nominee will magically decide some time next spring that someone who was an immigration reform advocate and who wants to substantially increase federal entitlements with a family tax credit plan is really who they were looking for all along. That part of the party, which is clearly in assent at this time, believes it is finally (since 1964) their turn. Cruz is looking more like the Republican nominee every day. 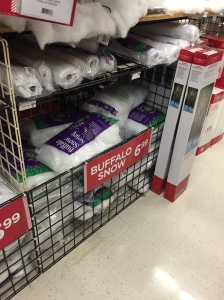 My daughter, Gen, is a graduate student at the University of South Carolina.  She sent me this picture today, taken at a Michael’s in Columbia, South Carolina.

I guess we are missing an economic opportunity here.