I try to have a mix of national and local politics on the blog, but admittedly the presidential campaign is so much of a story this year – an historical story – that it’s hard to get away from the subject. I must also admit that I haven’t done too much of the “other stuff,” as in Politics and Other Stuff.

The NFL announced its 2016 schedule last week. The draft is next week. The Bills have a Thursday night home game to kick off the season, and a Monday nighter. They still haven’t cracked into NBC’s Sunday night schedule, however, probably because of their middling performance last year.

Lots of fans, me included, got caught up with Bills fever last season. First full season for new ownership, generous spending on free agents, a new head coach with a big reputation. The Pegulas certainly opened up their wallet for players and coaches; some of the new players performed well, balanced out unfortunately by the play of high-priced stiffs like Mario Williams; and the head coach turned out to be a big mouth with limited talent. Someone should have paid more attention to his New York Jets record.

Now you know, perhaps, where this post is headed. Football and politics are a lot alike in terms of personnel. I refer you to a past post (October 20, 1915) where I compared the hiring of football coaches to patronage hirings in politics, while also noting similarities between Donald Trump and Rex Ryan.

The Bills did not do much in off-season free agency. Their only major personnel move since the 2015 season ended was to bring on a new assistant head coach. Their selection has been around the league a bit, most recently in New Orleans where he was fired even before the 2015 season ended because of his mediocre performance as defensive coordinator. I write, of course, of Rob Ryan, who happens to be the twin brother of head coach Rex Ryan. After searching high and low to find coaching help to improve a defense that went from fourth best in the league to 19th best in just one season under Rex Ryan, the Bills could find no one better than the head coach’s brother. (New Orleans had the second worst defense in the league last year.) In politics, when you hire your brother, it is called P-A-T-R-O-N-A-G-E. 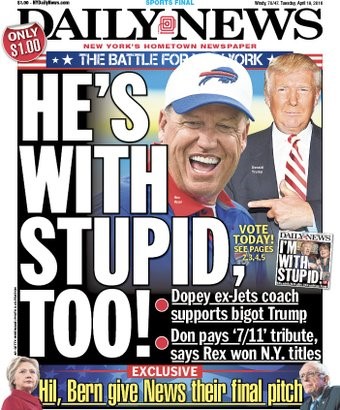 But Rex could not stop there. He is a well-known personage in the Buffalo area as well as in New York City. He often seems to speak before thinking. He tends to brag about things he cannot or does not deliver on. He likes bullies. So of course, Rex delivered the introductory speech for Donald Trump at last Monday’s Trump event in Buffalo.

It is interesting to note that to date none of the Bills players have commented on Rex’s Trump endorsement. Do they agree, do they not care, or are they afraid of the head coach?

Former Bills defensive back Jeff Nixon writes a great blog on all things football, jeffnixon.sportsblog.com. He does his homework on the dominant non-field issues of the sport, including the NFL’s attempts to deal with concussions and the legal matters that the subject has generated. He has detailed the size of NFL salaries in the 21st century and the struggle of former players to get a larger share of the huge money pot that is built on the foundations set by those former players.

A recent post reports on a survey of former high school and higher level football player dads. The survey indicates 90 percent of such men who suffered football-related concussions want their children to play tackle football. That’s an interesting finding given what appears to be an increasing challenge for some high schools to attract enough players to fill out a team.

Jeff’s post also sites another survey of 40 former NFL players between the ages of 40 and 65 which found that “those who began playing tackle football before the age of 12 faced a higher risk of altered brain development than those who waited until they were older.” That sort of information is undoubtedly what is giving parents and their sons some second thoughts about playing football.

If you like following football I recommend Jeff’s site to you. Jeffnixon.sportsblog.com

Consider this an “I-read-them-so-you-don’t-need-to” report. The emails from presidential candidates and some related characters continue to pour in to my inbox.

Governor John Kasich wrote on Wednesday (emphasis all as contained in the email):

make no mistake, New York was a big step forward for our campaign. Trump was always going to win his home state but we not only walked away with delegates (Cruz won 0), we also finished a strong second place and proved what we’ve been saying for a long time: I’m the best Republican candidate to deny Trump the nomination moving forward AND defeat Hillary Clinton. If you agree, chip in $25 or more right now to help us capitalize on this win and ensure we gather more delegates during next Tuesday’s five primaries! The Stop Trump movement missed an opportunity to support us in New York and deny Trump quite a few more delegates but we’ll get another opportunity next Tuesday.

I must admit that when I wrote a short analysis of the New York primary, also on Wednesday, I neglected to mention how the election was a “big step forward” for the Kasich campaign. That take certainly explains the Governor’s request for a donation to “capitalize on this win.”

The email that really got me this week, though, was from former House Speaker Newt Gingrich.

Get your name permanently displayed next to mine in the Chairman’s Lobby at GOP Headquarters.

I want to see your name just before I walk into a meeting with Reince. Normally such an honor is only given to members of the Party who contribute $100 or more. But because I’m so committed to bringing you on board, you can get your name displayed in the lobby for just $35.

For once, I want to hear the mainstream media focusing on how divided the Democrats are. I want to show the MSM that our Party won’t give in to their dirty tricks intended to pit us against each other.

So to summarize if I may, Newt believes that the Republican Party “either unites or dies.” The uniting part is not going too well at the moment. Old Professor Gingrich may be on to something there.

As to the closing comment about Democrats’ “dirty tricks intended to pit us against each other,” I can only suggest the Republicans have done quite well so far this year pitting themselves against each other, not that Hillary Clinton or Bernie Sanders haven’t gotten in a shot or two thus far.

Sorry Newt, but as tempting as it is to get my name on the wall of fame at RNC headquarters, I have to think that when anything is offered for sale at a 65 percent discount, there is something wrong with the product. I’ll pass.