Campaign committee financial reports were due from candidates’ committees last Friday, October 28, with information that was available through October 24th. Committees must now, through Election Day, report contributions or loans of $1,000 or more. Here is a summary of the most competitive races.

John Flynn and Joe Treanor are taking to the airwaves as they bring their campaigns to a conclusion. Treanor, who pledged to self-fund his campaign, has loaned his committee an additional $39,000, bringing his total to $50,000. His treasury balance as of October 24th was $40,214. No TV ads were listed in the expenses as of that date, but ads are now running.

Both campaigns have funds available for modest TV buys in the remaining week of the campaign.

Amber Small’s campaign raised $53,795 in that same three week period, with a large portion of the receipts coming from unions. Her largest expenditure was $15,000 for a poll, which was likely requested by the state party before they would commit funds to the race. Governor Cuomo’s non-committal comments on this election, as noted in last week’s post, may be indicative of the results of that poll.

Small’s financial resources continue to be dwarfed by those of Republican Chris Jacobs. He took in $458,788 between October 3 and 24, with more than three quarters of that amount coming from the Republican State Senate Campaign Committee. Union contributions to Jacobs were also significant. Jacobs’ campaign purchased $438,729 in TV ads during the reporting period.

The ads and mailers have turned highly angry, with both sides registering on the negative side of the False/True meter – not a great way to end either campaign.

This David versus Goliath campaign has Democrat Tom Loughran challenging incumbent Michael Ranzenhofer. Loughran’s campaign war chest is about 3 percent of what Ranzenhofer has in the bank.

Ranzenhofer in the past three weeks spent $179,094, but that included $159,000 which was sent to the New York State Senate Republican Campaign Committee, likely for Party purposes outside of the 61st District.

This election may take the prize for futility. Both Democrat John Ceretto and Republican Angelo Morinello have spent thousands of dollars on TV ads and mailers, all for the purpose of having one more Republican or one more Democrat in the Assembly. The Assembly currently has 104 Democrats and just 42 Republicans in a house of the Legislature where 76 votes are a majority; one member is an independent; and another one a registered Conservative; and with two current vacancies.

This election seems to simply be a feud among Niagara County politicians. Ceretto was previously elected to the seat as a Republican, but switched parties in 2015. State Assembly Democrats appear to be trying to lock in the seat for the Party.

The four local candidates for State Supreme Court in the 8th Judicial District are also making the TV and radio stations and print shops happy.

Republican Mary Slisz’s mostly self-funded campaign spent $184,255 on TV and radio and had a balance of $5,599 in the account.

And you thought local elections are sometimes strange

In an Assembly District on Long Island a Democratic candidate has probably made himself the butt of a lot of jokes. You can try to hide from such an embarrassment, but you cannot really wipe it away. This campaign may give new meaning to the expression, “when they go low, you go high.”

If all politics are local, then the ugliness of 2016 is on full display in Oyster Bay, New York. 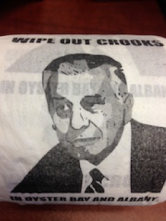 self-described “corruption-bashing machine,” started handing out 100,000 rolls of toilet paper with Town Supervisor John Venditto’s photo on them to protest the fact that Oyster Bay is becoming “the butt of [everyone’s] joke.”

At issue is Venditto’s handling of the Nassau County town’s budget — Oyster Bay is New York’s only municipality with a “junk bond” rating from Standard & Poor’s, according to Long Island’s “Newsday.”

The town has nearly 300,000 residents, and its local government is made up of one town supervisor and six council members.

Hart, a Democrat who’s seeking a state assembly seat representing the area, has made waves with attention-grabbing campaign promises such as a plan to erect a $1 million marble statue of musician Billy Joel outside Nassau Veterans Memorial Coliseum in Long Island.

His opponent, New York State Assemblyman Michael Montesano, is a Republican who has served in the state assembly since 2010.

Montesano is not doing enough to honor Joel, Hart said in a press release.

“My opponent is either impotent or is simply not trying, because everyone loves Billy Joel,” Hart said. “No wonder Albany is a mess, our representative can’t do something as simple as renaming a small portion of a road in Billy Joel’s backyard, where there’s near universal support.”