When someone is having a really bad losing streak it can be very tempting to exaggerate any positive development, no matter how small. Thus it came to pass last week that House Republicans – at least 217 of them – and Donald Trump celebrated the approval of one of the most despicable pieces of legislation ever to see the light of day, the American Health Care Act (AHCA). 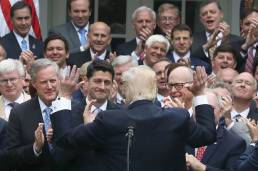 Even before their event with Trump at the White House it was reported that cases of beer were being wheeled into the Capitol to get the celebration off to the right start. There was this memorable photo op – a bunch of mostly old and overweight white guys, partying. It reminded me of my 50th high school class reunion.

Think for a moment about what was being celebrated: the approval of a bill in one house of Congress, the same House that approved similar bills about 60 previous times.  Most of the members or their staffs did not have the time to actually read the bill, let alone wait for the Congressional Budget Office to analyze and score the bill, thus letting members know the effects and costs of what they were voting for! You will recall from your civics lessons that a bill becomes a law when the same bill is passed by the House and the Senate and approved by the president. So last week was at best step one for the AHCA.

A friend likens the event to a football team recovering a fumble on the 50 yard line, spiking the ball, and then going off to celebrate.

The AHCA is really a sight to see. Just think of all the selling points:

With all that great news, who wouldn’t want to celebrate?

Donald Trump, Speaker Paul Ryan, and his House Republican caucus have together, as House Democratic Leader Nancy Pelosi suggested, forced Republican House members to walk the plank in support of a bill that will take from the poor and give to the rich; a bill that, if it became law, would force millions of Americans to go without health insurance. Once again they are saying “I’ve got my insurance, good luck getting yours.”

It is not just Pelosi who foresees major political problems for Republicans because of the AHCA bill. The nonpartisan Cook Political Report, which pays close attention to congressional politics, changed the lean of 20 Republican seats to indicate the seats have become more competitive. The Report noted  “House Republicans’ willingness to spend political capital on a proposal that garnered the support of just 17 percent of the public in a March Quinnipiac poll is consistent with past scenarios that have generated a midterm wave.”  The Report points out that not only did the vote hand the Democrats a great issue, but it will also help stimulate candidate recruitment.

From a political standpoint the Republican AHCA vote also created a serious side effect. Because the legislation would offer the states the opportunity to get a waiver of health insurance requirements in the matters of essential benefits and pre-existing conditions, the Republicans occupying seats of power in Washington have now shared their political burden with the party colleagues in the state houses.

It is now likely that Republican candidates for governor and state legislatures this year and next will be asked to weigh in on all the highlights of the AHCA. There are 36 governors up for election this year and next, and Republicans currently control a majority of those offices. Republican candidates for state legislative seats will likewise be drawn into the firestorm created by the House AHCA bill.

And all of this will play out not in a week or two or a month or two, but more likely well into the summer. As the Senate plods its way through the health care debate the implications of the House bill will be played out over and over. If the Senate manages to pass its own bill then we will get to witness how the somewhat more moderate Senate negotiates a final bill with the House radical right’s Freedom Caucus, which picked up all sorts of clout, far beyond their small numbers, after the original AHCA bill stalled in March.

Then there is the issue of the party base. Donald Trump continues to hold on to support from his more ardent supporters. Rank and file Republicans support him overwhelmingly. The thing is, the AHCA would greatly harm the Republican base in the rust belt and in coal country and in the rural sections of the country where they hate Obamacare but love the medical coverage it provides. Many of those folks would not otherwise be able to afford health insurance.

What this all comes down to is that Trump and the DC Republicans are just being consistent with the approach that the party has used repeatedly over the years. Their base is being used. Trump’s lying tweets and Paul Ryan’s uninformed BS are telling their supporters that they are being protected, that their medical coverage is secure, that the premiums will go down, etc. None of that is true. But as long as they can convince the base about those things, they can move on and attempt to use the base’s support to implement massive tax cuts for the superrich, their next legislative target.

The other thing is that the non-Republican part of the country – the majority of people who voted against Trump – are pretty well on to this scheming. Trump’s polling numbers are already pretty bad for a new president. Even Republicans like Rush Limbaugh, Ann Coulter, and Laura Ingraham are complaining about the guy they put in the White House. Limbaugh suggested that Trump “caved” on the recent budget vote to keep the government running through September.

This process is going to take some time. What we are seeing, though, is that our political system is able to challenge and resist Trump and his goofy actions. 2018 can’t come soon enough.

One thought on “The politics of Trumpcare”